The 2014 Model Horse Show Season came and went quickly for me. Palmetto State Live is my first and last show of 2014 due to having to move Spring of this year. I will be present for Region 8 shows when I resume showing my horses. This was a fantastic show, and I was very pleased with how well my horses did! There were some I was sad to see not place, but others I was delighted to see get a place in the Spotlight! Here's a loose breakdown of how we did:

The Palmetto State Live show series offers a challenge for showers by combining Artist Resin and Customs to show against each other. It also combined the Peter Stone and Breyer Horses to show in one larger OF Plastic division. All in all the show went as well as it could have. A lot of our regular champion horses did not place, while other never-placers ended up taking NAN cards.

There were no Division Champions at this show. Instead, there were only Group Champions and a Judge's Choice at the end of the Division. Here are our placings:

Other Places
We netted quite a few ribbons that weren't first or second... so I wanted to call attention to the other horses who stood out enough to earn themselves a nice ribbon! Here are our other 37 winners that didn't quite make it to the top! (color coordinated to reflect which ribbon placing they received!

Before I get into the particulars about the placements in this show, let me first explain a bit about it. This show was called Test of a Halter Champion because in this show your horse could show and compete for TWO different Halter Cards in TWO different Divisions. If your horse received a 1st or 2nd in BOTH classes, they could go to the Best in Show ring. The divisions were stand alone (Breyer, Stone, Other Make, China, Resin, Custom, etc) and combined classes, only split by size (OF Traditional Plastic Horses, Traditional Artist Resin/Custom, OF Mini Resin/China).

Other Placings
We received plenty of other ribbons, and for the most part only showed most of our horses one time. In the end, I believe 2/3 of my horses placed, while few NAN qualified. Considering the sparser class list, I am happy with the performance. No horses to connect to the placings, though I may update it later with as many of the results as I managed to get. 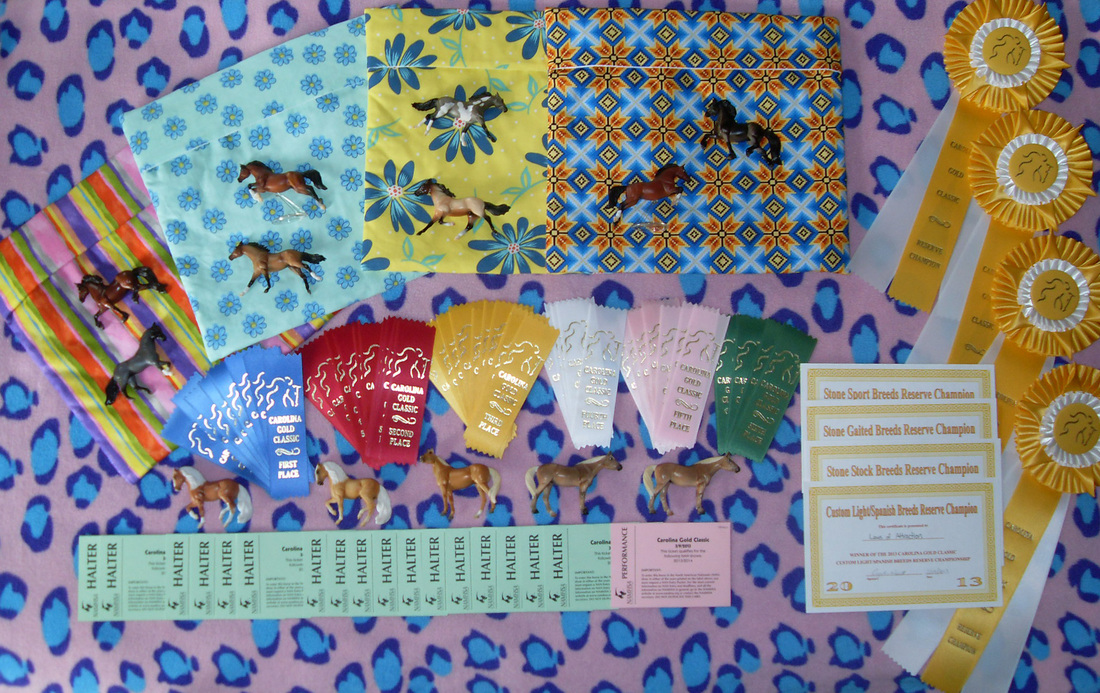 Man oh MAN! Started off the 2013 show season with a bit of a shaky start! Carolina Gold Classic had a whopping 69 entrants and hundreds upon hundreds of horses... some classes with over 50 entrants. HOWEVER... we did much better this year than we did last year... sorta. Last year I won one group champion, and one reserve and won the division. This year I won FOUR group reserve champions and no divisions. I came home with more rosettes (and they had pony bag prizes for Group champs/reserves!) so I came home with 4 of those too! I had twice as many NAN cards this year and... well, all my winnings are up there!

We had a challenging and exciting weekend at Hollow Horse Live 2, on September 8th, 2012. Pictured above are our horses that were lucky enough to make it to the Division Call Backs. From left to right:

Here's our horses that earned tickets to the North American Nationals at Hollow Horse Live 2! Horse's name is in color (red if they won second place-- blue if they won first place), followed by the class they were in. Great work!!

China: Little China Girl - China Morgan (We only have one OF China horse in our barn... and she won!)

Here's a mostly complete list of other horses that placed, but didn't quite make it to a NAN qualifying position. Great effort through some tough competition! Some of these classes had around 30 horses in them! Yellow signifies 3rd place. White signifies 4th place. Pink signifies 5th place. Green Signifies 6th place. It was a fast paced show and difficult to keep up with-- but thanks to Paul Nowak, my horse handler, for recording these scores the best he could!

Whew! Of all the horses we brought, over 2/3rds placed. It was our greatest haul of NAN cards to date. We also found our best success to date in Division Callbacks with 7 horses making it to the finals! Thanks for a wonderful time!