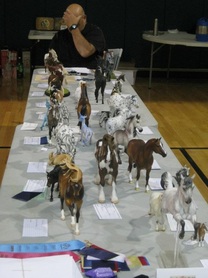 I love this photo, even though this man was the announcer-- not the judge-- his look of grief behind the table packed with Workmanship models, ready to be judged, is just a perfect picture.

Classes can be packed with or absolutely bereft of horses. The former tends to lead to serious congestion problems. Documentation can also lend to that problem and can come across as inconsiderate to other exhibitors in the way it is presented. When there's a class with 48 horses on the table, even though you're allowed an 8 1/2 x 11 piece of documentation it may be best to leave it back, or ask the judge to view it before hand.

In this section we're going to go over bullet points of how to best handle yourself in the classes.