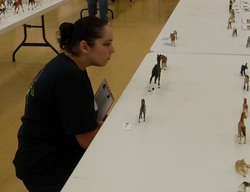 Depending on which horse it is (as we all tend to favor a few of our horses more than others) you might actually be pretty upset. You might even be upset with the judge for not pinning your beautiful horse. Before you go pointing fingers or accusing favoritism, please take the following points into close consideration.

For the sake of clarity, I am writing this section based off of the horses judging off of the following classifications in this exact order and weight: This is the exact order and weight that the judges at the North American Nationals are to judge by. Each show's rules vary on what the models are to be judged by, but I wanted to make note that Collectability is NOT covered in this section.

Was the class large, or the Ring over crowded? 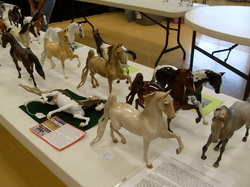 Anyways, to return to the topic:

Were your horses crowded? - If so, it's entirely possible that the judge couldn't get a good look at your horses or their documentation. When a horse has to be in the center of a table, the judge has a harder time getting a good look at them due to the general congestion of the ring as well as other horses blocking significant sections of your model.