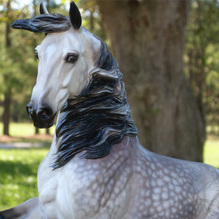 Laws of Attraction is our headliner horse. He is an Andalusian Stallion painted by Sheryl Leisure, and has also had some additional work done (she added wrinkles around his front legs, in the chest area). He was painted in a soft rose dapple grey.

When he was created in 2008, he didn't show at all until he ended up here at Blackthorn Stables in late 2011. He had no name and no history. While his life didn't have a happy beginning, he has certainly ended up getting that spot in the sun that he has so sorely deserved.

Considering he isn't a drastic custom, he really holds his own in the ring! 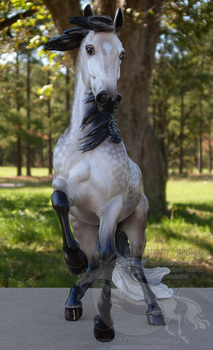 Pictures of Laws of Attraction

Click the image to open it up in a larger size.

Please do not claim as your own or re-use without written permission. All photos copyright Blackthorn Stables