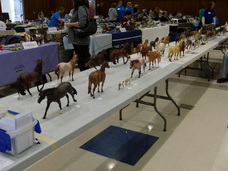 It's happened to all of us. We get to the show hall, super excited to show our new horse for the first time. We are so certain that he's not only going to place, but he's going to NAN qualify... possibly even get Group Champ! His class is called and it's that moment of truth.... which quickly turns to horror as you watch dozens of horses flood the table... some identical to your horse, and some with the same breed assignment. Then, sadly, when the class has been pinned you walk up to see your horse didn't even place.

What happened? What went wrong? What can you do to succeed next time? I will cover that information in this section!

NOTE: For the sake of clarity, I am making all my statements based on a horse being judged on the following information, in this order (which is the standard that the NAN judges are held to) I am NOT taking collectibility into account here.

Check your end of things

The first thing to do, is make sure that everything was fine on your side. This can be done by asking yourself (and maybe researching) a few questions.

- Did the breed fit the mold and color? - I know this all was likely checked BEFORE going to the show, but still worth noting!

- Was the horse in the right class? - It's important that the horse was in the correct class in order to place effectively. Example: Did you know the Marwari is actually a gaited horse? Many people show the breed in Other Light, which judges are mostly okay with. But others show him in Other Gaited (with documentation) and it really makes him stand out.

- Was the horse properly cleaned? - Did you make sure and get the dust between the ears? Did he have any smudges on his body that was noticeable in the light on the show table?

- Did the horse acquire a new flaw? - Sometimes in transit a horse might get a new finish flaw that you didn't notice when you put him in the show ring.

You can even ask the judge when she gets a moment after the class if you truly felt your horse should've placed. But ALWAYS approach the judge in a non-emotional and non-aggressive manner. Instead of saying "My horse didn't place, what gives?" ask her "This was my entry, he didn't place and I was wondering, is there something I can do to improve his chances of success next time?"

Or, she will tell you that the horses she pinned actually had more redeeming qualities than your model did. This is usually the case (which brings us to our next topic!)

IT'S NOT YOUR FAULT!

As a seasoned show participant I've had my fair share of heartache in the Breyer Ring. Specifically the tough classes like Paint, Warmblood, Thoroughbred, Quarter Horse, etc. Rather than being upset about the lack of ribbon, try to put it in perspective by taking a look at some of the winning horses (or look at the group callback class) and note the following:

- How many horses were in the class? - Larger classes mean more competition. This means that there's more horses with different breed choices (possibly more obscure and well documented breed choices?). It also means that there may be rarer horses in the class (which judges tend to take a favor to). In my opinion, winning a NAN card in a class of 10 doesn't mean as much as winning a 3rd place in a class of 40.

- Did the winning horses have better shading? - If your Barbaro didn't win, but another Barbaro DID win, take a look at his shading, markings, and overall appearance. I've noticed that most judges favor darker horses or horses with deeper shading.

- Were the winning horses rare? - Was there a Glossy Prize model amongst the winners? Perhaps a Breyerfest Raffle model? Or maybe a One of a Kind Auction piece? Even though the rarity shouldn't come into play in a judge's decision, these models tend to be produced with more care than the regular run or even mass-produced Special Runs are. Most of the time these are the only horses that are made in the US instead of China. So, Rarer horses = Better finishes, richer color, and crisper markings.

- Was it a mixed Division? (Mini & Trad) - If you're showing a Stablemate scale horse alongside Traditionals, it's easy for them to "get lost" amongst all the big guys. A lot of judges actually have a strong preference for traditionals because the detail tends to be more abundant both in color and mold structure that simply can't translate as well to a smaller scale.

- Was it a mixed Division? (Stone & Breyer) - Some judges have a strong preference for specific molds, especially when two companies are pitted against each other. Some judges absolutely abhor Stone and their poor business practices so much that they (wrongfully) turn their nose up at any Stones in their classes. Meanwhile, other judges may think that Stone is just the bees-knees and will pin nearly every Stone horse. Generally speaking, Stone paint jobs tend to be more detailed than Breyers, putting them above the Breyer RRs. In my opinion, the two companies should never show in the same Division due to the crucial differences in production.

Never judge your Breyer (or OFs) success or failure as a show horse based off of one show. Take EVERYTHING into account as in many cases it's not exactly that your horse is bad, it might just be other horses in the class (as well as the class size) that attributed to your lack of success.

Check to see which horses and molds are consistently winning at specific classes. The Cigar mold tends to do better than others in the Thoroughbred class. So, if you want to show your Rags to Riches but don't think she'll stand out in that class, do some research on other breeds to find a better fit for her.

Check to see what breeds the winning horses are. Write them down. People get really defensive over their breed choices. But at a show, they can't exactly hide their breed assignments from fellow participants. When the class has mostly been filled (before the class is closed... don't interrupt judging!) take a peek at the horses with documentation. What breed are they? What mold are they? Write it down, research it when you get home. To build on the previous point: Look at what the other Ruffian/Rags to Riches molds have as far as breed assignment goes. write it down, and after the show do some research to see if it works for your model.

Check the Group and Division Callback Classes. What's winning? Take the time to walk by the callback classes and look at the class winners. This further builds on the previous points. You're seeing what molds are winning and what their breed assignments are. This is something you may later choose to apply to your horses for greater success.

If you're sure of your horse's breed choice, don't change it because of one or more losses. Take everything that has been said here into consideration. If you're CERTAIN that it's a good fit, then KEEP AT IT! My GG Valentine hasn't NAN Qualified once. Not even once. But, I'm certain of her breed choice. I know that the competition is just dually difficult in the Warmblood class with the gorgeous Totilas, Keltec Salinero, and Idocus models... but I'm certain that if I keep at it, one day she'll be successful!

If at first you don't succeed... try, try again!